Today marks the third big INVERSUS update on Steam with version 1.3.0. The PS4 update will be coming soon after. Let’s dig into the highlights! 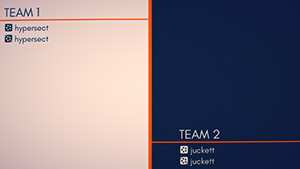 INVERSUS has competition at its core and today we’re making big strides towards getting players in matches more often and across more varied game modes!

Let’s talk about 2v2 battles. In the past, you could enter 2v2 as a solo player or by first making a team with a friend, but these two groups were matched up separately – solos could only match with solos and teams could only fight other teams. With the new patch, solo players and grouped teams can mix into the same 2v2 game. This means more matches for everyone!

Continuing with 2v2 improvements, I’m happy to announce that INVERSUS now supports multiple local players joining an online game! You and a friend can team up on the couch, enter matchmaking from the same computer and fight other players online. In private 2v2 games you can mix local players and online friends in any combination — even three players at your house playing with one player at a friend’s house.

The 1.3 update also changes the cadence of how public matches are played. In the past, you would search for players until the lobby was full. Then you would play continuously with that group until someone dropped out. Games would often last a long time and both players would generally leave in unison. This made it hard to find a match if you joined while all existing lobbies were full. You’ll now get prompted to search for a new opponent after every couple maps in a public game. This will either find any stragglers or rematch with your opponent for another bout.

If you want to see how all this works in practice, check out the demo video here:

INVERSUS was on display in Los Angeles this past weekend at IndieCade! The game was setup in a theater as University of Southern California and part of a small tournament. Thank you everyone that showed up!

In celebration of the new update, INVERSUS is currently 20% off on Steam for one week! Spread the word and lets play some 2v2 matches!